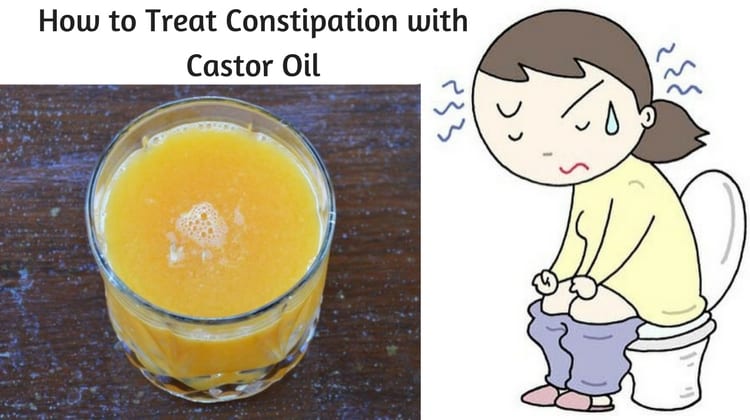 Are you having less than 3 bowel movements per week or your stool is hard to pass? Then you’re suffering from constipation.

Constipation is a common digestive disorder that was caused due to an unhealthy lifestyle, dehydration, stress, lack of physical activities, poor diet (lack of fiber), age, hormonal imbalance, usage of certain medications, etc.

Are there any Natural Remedies to Treat?

Fortunately, there are many natural remedies like olive oil, prunes, apple cider vinegar, spinach, etc. for preventing constipation and thus makes you not to use any over the counter laxatives to get rid of the problem.

In this article, you are going to know about a natural and most widely used ingredient called castor oil for treating constipation.

Does Castor Oil Work for Constipation?

We all know that castor oil is natural oil that was extracted from the castor beans. Since from olden days, this oil is used as a stimulant laxative to treat the bowel movement problems but most of the people don’t know how it works and is it safe to use or not.

Here we are providing you the properties of castor oil that help to get rid of constipation.

How to use Castor Oil for Constipation?

Here are some best ways of using castor oil for treating your constipation. Have a look at them and follow them regularly to get rid of constipation and its symptoms.

Taking this oil by mouth is the most common method used to get rid of the problem but be sure with the quantity of the oil. For adults, it’s 15 – 40 ml to get rid of constipation or else it results in diarrhea.

You can also apply castor oil pack on the skin to enhance the circulation and thereby to improve digestion and move the things easily to have a bowel movement.

Note: Or simply apply a cloth soaked in castor oil topically on the affected area to get rid of constipation.

Castor oil works faster than other laxatives, so the best time is during the day rather than night. Other laxatives are taken at night, which works slowly for overnight and enhances the bowel movement in the morning.

This oil gives relief within 2 – 5 hours by stimulating the bowel movement. So, always prefer to take it in the early morning on an empty stomach but not in the night before bedtime, as it disturbs your sleep.

Who can (or) can’t use Castor Oil for Constipation?

Castor oil usage is not recommended for all the people due to its nature. Here is the list of people mentioned for those who won’t take castor oil to treat their constipation.

What is the Recommended Dosage?

Always ask the doctor for the proper dosage (or) follow the specific dosage instructions on the bottle. If you don’t have any information about it then go with this general rule. Overdosage will cause electrolyte imbalance and dehydration.

How Long to Take Castor Oil?

Castor oil should not be taken (or used) for a longer time. Over certain time of usage, it exhibits some side effects like reducing the muscle tone in the intestine and thus causes chronic constipation. Also, it lowers the amount of potassium (or its absorption) in the body.

So, avoid taking this oil as constipation medicine for more than 7 days unless it is recommended by your doctor. Stop taking the oil to prevent side effects like abdominal pain, diarrhea, nausea and intestinal weakness. Tell your doctor, if you’re suffering from these side effects after the usage of castor oil.

The main thing to remember is to take the castor oil dose at the same time every day to have proper bowel movements.

Castor Oil for Constipation in Babies:

You should not give castor oil for treating constipation in babies or kids, as it causes side effects rather than relieving them from constipation. The best thing is to massage their tummy with this castor oil, which helps to move the things easily and help them to get rid of constipation.

Try this Castor Oil to treat Constipation. Do you think anything about constipation I missed mentioning in this article? Then share it with us in the below comments box.