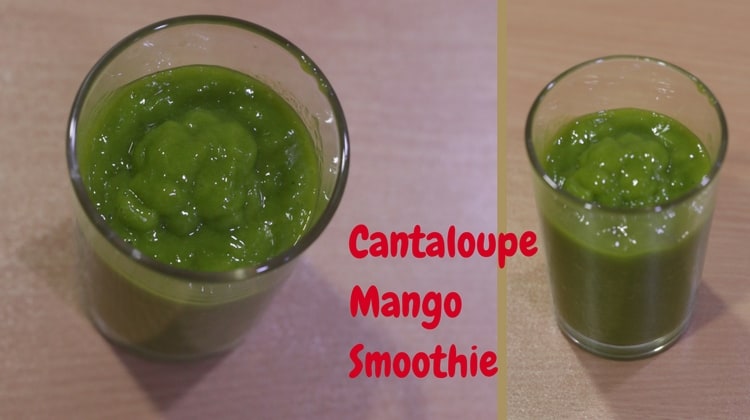 This creamy and delicious cantaloupe and mango smoothie is a refreshing snack that can be enjoyed during mid-afternoons or used as a breakfast or lunch substitute to cut out some unwanted calories. Both cantaloupes and mangoes render a refreshing fruity aroma and loads of dietary fiber to the smoothie which makes it absolutely satiating, so that you stay filled up till the next meal. High level of fiber and water in this smoothie also helps to relieve constipation and detox the body. Cinnamon is the magic ingredient in this smoothie that not only adds a rich flavour, but also provides loads of antioxidants to the body.

Cantaloupes are loaded with water that helps to fight dehydration and heat stroke during summers. Fiber, vitamin C, potassium and choline found in cantaloupes help to improve heart health by lowering high blood pressure. It also reduces the risk of stroke and heart attack. Potassium helps to preserve bone mineral density and reduce the risk of kidney stones. Fiber and water content in cantaloupes helps to maintain healthy digestive tract and prevent constipation. Antioxidants and beta-carotene present in cantaloupes protect the eyes and reduces the risk of progression of age-related macular degeneration. Beta-carotene also plays a protective role against prostate and colon cancer.

Mangoes are a rich source of antioxidant compounds such as quercetin, isoquercitrin, astragalin, fisetin, gallic acid, methylgallat and enzymes that provide protection against various types of cancer – prostate cancer, colon cancer, breast cancer, etc. Vitamin C, dietary fiber and pectin present in mangoes help to lower the level of unhealthy LDL cholesterol in the blood and improve heart health. Dietary fiber also helps to improve satiety and reduce hunger pangs which in turn aids weight loss. Vitamin A present in mangoes protects the eyes and prevents dry eyes and night blindness. The acids in mango help to maintain the alkali reserve in the body.

Spinach is loaded with nutrients and antioxidants that help to protect the cells against oxidative stress, protect the heart, reduce the risk of cancer and lower high blood pressure. Spinach is a potent source of dietary fiber (insoluble fiber) and protein. Insoluble fiber slows down the digestive process and increases the feeling of satiety which in turn prevents overeating. Vitamin C present in spinach promotes healthy skin and boosts immune system function. Spinach is a potent source of Vitamin K, a rare nutrient that promotes bone mineralization. Folic Acid aids normal cellular function and tissue growth. This nutrient is especially essential during pregnancy. High iron content in spinach supports the creation of haemoglobin and helps to treat anemia.

Cinnamon adds a nice flavor to the smoothie. The distinctive smell of cinnamon is attributed to its natural oil which contains a compound called cinnamaldehyde. Most of the health benefits of cinnamon are linked to this compound. Cinnamon is loaded with antioxidants such as polyphenols that protect the cells against oxidative stress and reduce inflammation. Cinnamon reduces the level of total cholesterol, LDL cholesterol and triglycerides in the blood which helps to protect the heart. Cinnamon also increases insulin sensitivity in the body which helps to boost metabolism and treat Type 2 Diabetes.

Here is the recipe…

This is a 100% gluten-free and vegan smoothie that do not contain milk or dairy products which makes it suitable for people with gluten and lactose intolerance. This recipe can be modified to suit diabetics as well by simply leaving out the honey.