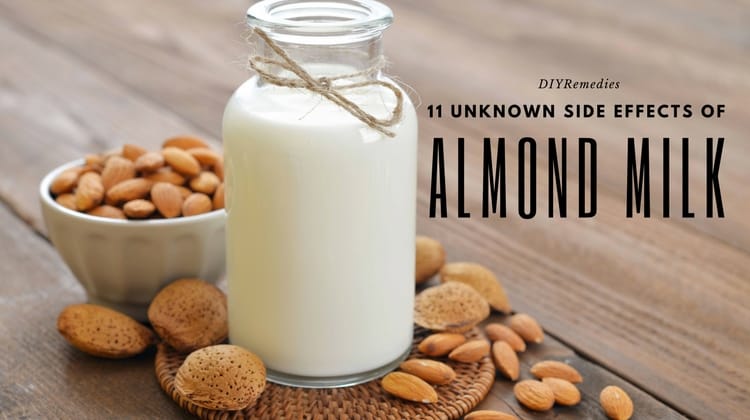 Almond Milk – A tasty delicious drink that most of the people, including me, like it. We all believe that almond milk is very healthy and non-lactose drink which have various properties required for a healthy body.

The rich content of calcium, proteins, essential fatty acids, vitamin E and other nutrients in almond milk makes it as healthy and dairy free milk. Everything in this world has its pros and cons, do you believe it or not? The same thing applies to almond milk.

Yes, almond milk causes various allergic reactions in the body and its consumption (in more and regular intake) will cause some negative impact on the health.  Here in this article, we will know the cons (shocking side effects), which you have to take into consideration before drinking almond milk.

Side Effects of Almond Milk on the Body:

Here are some negative effects of almond milk on health. Scroll down to know these shocking side effects and remember those before drinking almond milk.

Most people those who have lactose intolerance will choose almond milk as a healthy alternative to their dairy milk. Almond milk may cause some reactions on the health that range from mild to severe, depending on the almonds consumed.

People who have nut allergies should not consume almond milk, as it causes swelling on facial area (or) tingling sensation around the mouth. So, stop drinking almond milk for those who are suffering from nut allergies to get rid of negative impact on the health.

The swelling in the throat will spread to vocal cards and thereby blocks the airways resulting in laryngospasm. You can feel difficulty and discomfort in breathing and one may die if it is not treated on time. So, stop consuming and consult your doctor for medical care to get rid of the problem.

Almonds are generally considered as goitrogenic food due to the presence of chemical substances that harm your thyroid gland. So, almond milk if consumed in large level may result in severe complications. It affects the absorption and digestion of iodine and thereby results in swelling of this gland.  One should think twice before taking almond milk to get rid of this negative side effect.

People who are allergic to lactose will choose almond milk but do you know that they also get some side effects by consuming this almond milk. So, avoid the intake of almond milk to prevent the allergic reaction of lactose on the body.

Almond milk is not beneficial for children health, as it may result in many complications in their future life. Also, the baby suffers from malnutrition due to the deficiency of nutrition contained in almond milk. The almond milk will not provide the sufficient nutrients required for the complete development of a baby. So, think before feeding almond milk to your children.

Bloating in your abdomen is another side effect of almond milk. The intake of almond milk will result in the increase of stomach size and thereby causes the symptoms of abdominal bloating like the formation of gas, stomach pain, etc. So, if you feel any stomach bloating after drinking almond milk then stop drinking it to get rid of this side effect.

Consumption of almond milk may result in abdominal cramps but make sure to check whether the stomach pain is sharp, mild or severe by identifying the reasons. If you notice that stomach ache caused by drinking almond milk then stop consuming it, as it is an indication that this milk is not suited for your body.

People with nut or any allergies will experience cold and its symptoms after taking almond milk. So, people suffering from any sort of allergies have to avoid the consumption of almond milk.

Diarrhea is another serious negative effect caused by consuming almond milk. In general, diarrhea lasts for 2 days but if you still suffering after 2 days or experiencing certain symptoms like blood in stools, fever, abdominal pains, dehydration signs, etc. then you should consult your doctor immediately for proper diagnose and treatment.

However, there are many reasons for getting headache and vomiting but if you observe these symptoms especially after consuming almond milk then stop the intake of almond milk to get rid of these negative impact on the health.

People may experience some metallic taste in their mouth along with tingling or itching sensation, which is another fatal reaction of drinking almond milk. If continued for some time, the severity of symptoms will be raised like low blood pressure or difficulty in breathing and thereby the person will lose consciousness.

Hope you find this article informative and helpful. Always remember that it won’t cause all these side effects to an individual but you can experience at any point of time, as per your health problems.

Do you experience any other side effects after drinking almond milk? Then share your experience with us in the below comments box.