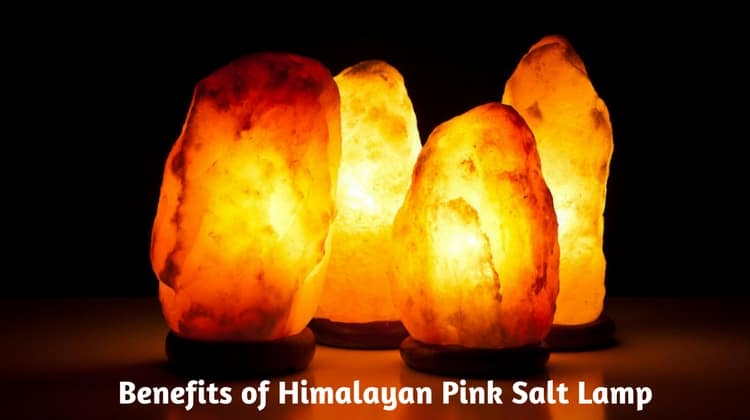 Himalayan Pink Salt Lamp – Recently it has gained its popularity due to its amazing properties and benefits. This lamp is very effective in purifying and cleansing the air along with treating seasonal affective disorders.

You will miss a lot if you don’t own a Himalayan pink salt lamp. It acts like an open window that provides a fresh natural clean air wherever you place it. Before going to know its benefits, first, we will know how it works on the body in detail.

There are three important particles like protons (positive charge), neutrons (no charge) and electrons (negative charge) used to made atoms and thereby molecules to create and activate human body or air or water.

At times, electron flies off and leaves behind a positively charged ion whose sole purpose in life becomes to fill the void left by its little electron. So, due to the difference in the molecular structure, some materials lose electrons much easier than others.

Now let’s have a look at the benefits which we can grab by placing a Himalayan pink salt lamp in our surroundings.

However, there are many benefits that emitted after turning on the Himalayan pink salt lamps but here we discussed few best benefits of using this lamp in and around you.

1. Cleanse and Deodorize the Air:

The lamp exhibits an incredible power of removing all the dust, environmental pollutants, cigarette smoke, pollen and other impurities from the air. Do you get a doubt that how they do this, all it is a big chunk of salt with a salt with a light bulb inside?

The simple reply to your question is that this Himalayan salt lamp will purify the air flow through hygroscopy process, which means it attracts and absorb the water molecules from its surroundings or from any foreign particles.

Although, the light bulb inside the lamp will warm up the salt lamp and evaporate the water back into the air and the trapped particles (like smoke, dust, pollen, etc.) will remain inside the salt lamp.

Due to the heat emitted by the Himalayan pink salt lamp, the hygroscopic cycling of airborne particles will begin to change, which in turn changes the charge of the released molecules. Then the majority is filled with positively charged ions which not good for a person’s health.

Do you know that breathing lots of positive ions in the air will make the windpipe sluggish and thereby make it not to work as well to keep the impurities out of the lungs? The usage of the Himalayan pink salt lamp will absorb the water, impurities and positive ions with them.

When the lamp gets heated then the salt releases clean water as a vapor into the air along with expelling negative ions to have opposite effect on the airways and there to clear lungs. The salt will make you breathe pure air without straining more on the lungs for purification.

3. Reduce the Symptoms of Asthma and Allergy:

We already came to know that Himalayan salt lamp will remove all the purities, even microscopic particles like dust, mold, pet dander, mildew, etc. from the surrounding air. So, place a lamp or two in your bedroom or any other rooms where you spend most of the time will cut down the allergic symptoms.

This salt lamp is also effective to the people those who are suffering from asthma, as they can feel the difference in their nasal passage way after spending time regularly with this lamp for a week or two. The Himalayan pink salt inhalers are also available in the market to prevent any blockages in your airways.

Nowadays, we are living in the world where there is a high range of electromagnetic radiation due to our electronics (like computers, television, sterio, tablet, cell phones and other appliances), which is invisible but it exhibits very serious long term effects on the body.

Do you know that constant long term exposure to the electromagnetic radiation will increase the stress levels, reduce the body’s immune system, cause chronic fatigue or reduce energy levels? Why because the radiation will emit negative ions into the air.

The usage of a Himalayan salt lamp will neutralize the electromagnetic radiation and thereby protects your health in this modern electronic world. All you need is to place this salt lamp next to the computer, TV or any other electrical devices to reduce the potential danger caused to you.

Camping in the mountain, spending time at the beach or taking shower as a first thing in the morning, etc. will expose us to raise the concentration of negative ions like those generated by this lamp. In general, the positive ions will reduce our body energy.

So, if you’re constantly feeling tired with low energy levels unknowingly then try placing the Himalayan pink salt lamp in your room where you spend most of the time and notice the difference which you’re felt afterward.

Insomnia or not getting a quality sleep is another side effect caused due to the over exposure of the body to positive ions in the air. The reason behind it is the positively charged particles will reduce the oxygen and blood supply to the brain and thereby leads to irregular sleeping patterns.

The usage of Himalayan pink salt lamps will activate the negative ions naturally and thereby reverse the problem. So, place 1 – 2 Himalayan salt lamps around the bedroom to improve the air quality and to get a better sleep at night.

If you are not getting any sleep at night due to the lamp light at night then you can turn off the lamp and sleep well. But make sure to enjoy the daytime exposure to the Himalayan pink salt benefits.

Not only improving the mood and energy levels, the usage of Himalayan pink salt lamps will provide a natural light that is close enough as a warm glow of sunshine, which relieves your seasonal affective disorder symptoms.

So, if the days are shorter in this year then you have to spend most of the time with the warmness of Himalayan pink salt lamps to fight against the lethargy and other seasonal allergies.

The usage of Himalayan pink salt lamps will enhance your mood naturally by making you relax well at the end of the day. It also improves your concentration due to the rise of the effect of the negative ions on the body. It improves blood and oxygen levels to the brain and other organs along with boosting the serotonin (a neurotransmitter that keeps you feel happy).

9. Lessen the Static Electricity in the Air:

Most people think that static elasticity is not a health problem but do you know that it causes frustration, stress or embarrassment? It results in bad hair day and makes it unable to clean crumbs or coffee grounds off of the kitchen counter.

So, place a Himalayan pink salt lamp will definitely help you to neutralize the airborne ionized particles and thereby reduce the pain caused due to this static elasticity.

The Himalayan pink salt lamps are a naturally gifted thing that will be definitely an environmentally friendly. It is projected to last for at least 350 years but the base of this should be a neem wood along with low wattage bulb that has less energy consumption.

Is there any chance to decorate the room with different shapes of Himalayan pink salt lamps?

Himalayan pink salt lamps will work as an eco-friendly source of light and also makes your room look attractive. However, there are more exciting and innovative designs available in the market that makes you can decorate it all over your home.

Is there any way to check whether the Himalayan salt lamp is fake or original?

Yes, there are some signs which help you in knowing which one is original and which one is fake or cheaply manufactured salt lamps. Here we go the simple tricks to know how original it is.

Your lamp should be bright – Himalayan salt will range from medium pink to dark orange color with its full range of various minerals. The light emanated from this lamp will be uneven and muted. So, if your lamp is a small and emitting light that fully illuminate the room then it is a fake one.

The lamp having a white crystal but not expensive – In general, white Himalayan is a rare and highly sought after. So, the genuine white Himalayan salt lamp is more expensive rather than colored varieties. If you find the price of this white salt lamp similar to colored one then it is a not a genuine salt lamp.

Holds moisture well – We know that Himalayan salt lamps will cleanse the air by absorbing moisture and airborne particles in the process of hygroscopy. So, if your lamp is sweating then it is a pure one and if you live in the moist region and the lamp never sweat then it is a fake one.

The Himalayan salt lamp is extremely durable – The genuine Himalayan pink salt lamps tend to be fragile. If the accident dropping (due to poor package or shipping or improper handling) or bumping your lamp leads to another solid object then it is a sure way to ding away the pieces of salt crystals.

It is expensive and weighs less – We already mentioned that this salt is very rare and comes from one region in the world, so it cost more and an authentic lamp weighs not more than 20 pounds to emit light uniformly. So, cheap and heavy lamps that provide tons of light are not real salt lamps.

How to choose (or) Where to place this Himalayan pink salt lamp?

The coverage will be determined by the size of the crystal while choosing the Himalayan pink salt lamps. For an average bedroom, small lamps (8 lbs) are good and for a living room or den, larger lamps (15 lb) are good, as there will be more space.

If you’re unable to find a large lamp for any large room then you can use multiple lamps spread all around the space to grab the same benefits.