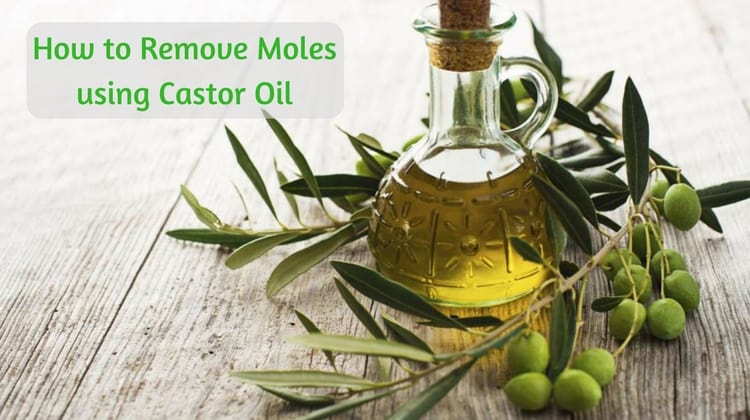 Do you have a mole that affects the beauty of your skin? Wondering how to remove it safely and easily? Then go through this article to know how to remove moles on the skin.

Moles (or melanocytic nevi) are non – cancerous growth in the body that is caused due to the collection of melanocytes, which are formed into clusters rather than spreading throughout the body.

Always check its abnormal characteristics like color, diameter, and asymmetry of the border before using any natural remedy and also consult your doctor for proper diagnose, if you’re suspecting it as any cancerous growth in the body.

Prolonged sun exposure, hormonal changes, unhealthy diet, certain health issues, stress, genetics, etc. are some causes for mole formations on the body. Instead of choosing cosmetic procedures such as freezing, cutting, laser excision, burning, etc., you can go with some simple natural remedies for removing moles.

Castor oil is one of the best oils that effectively used to get rid of moles on the skin. In this article, we learn all about how to clear moles using castor oil.

How Does Castor Oil Work for Mole Removal?

Castor oil is effective oil that used since many ages to treat various skin ailments (including mole removal).

How to use Castor Oil for Moles Removal:

Here are some best ways of using castor oil to remove moles. All you need is to follow the castor oil methods regularly without any delay till you removed the mole completely.

Application of castor oil on moles will loosen and remove it from skin.

Note: Or soak a cotton pad in castor oil and apply it on the mole. Cover it with a gauge and discard the cotton pad after 2 – 4 hours. Repeat the process regularly till you get rid of the problem.

Baking soda releases free hydrogen ions, which react with skin tissues and makes it dehydrate and removes it easily. This combination is very effective in clearing moles without leaving any scars on the skin.

Garlic has enzymes that help to break down the clusters of the cells and thereby spreads the skin cells normally without the formation of pigmentation.

Garlic may cause some stinging sensation, so apply either coconut oil or petroleum jelly on all around the moles to protect the skin.

Honey has antibacterial and skin soothing properties that clear the moles without leaving any scars on the skin.

Note: Or mix 1/2 teaspoon of flaxseed powder in this castor oil – honey mix to get faster results.

Tea tree oil penetrates deep into the skin and acts as a drying agent that dries out the mole from its root. It also acts as a disinfectant that clears the problem which is caused due to any infections.

Note: Do some skin patch test before using tea tree oil, as this oil causes some allergic reaction in some people.

This is all about castor oil for mole removal. Have you used castor oil to remove your moles? Share your experience with us in the below comments box.