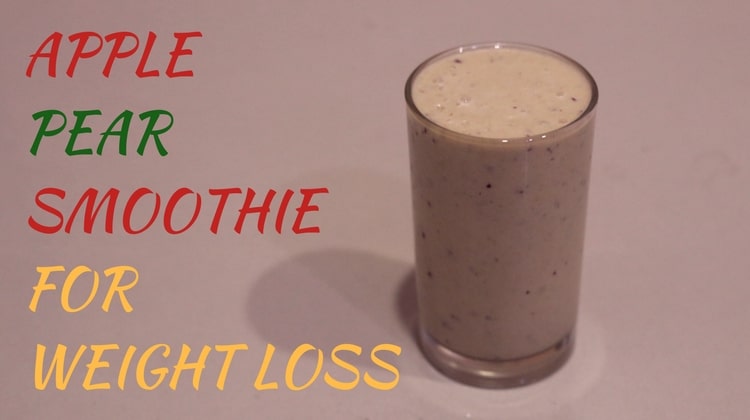 The combination of apple, pear, oatmeal and yogurt in this smoothie makes a wholesome and healthy breakfast to kick start your day and stay energized till the evening. Almost all the ingredients used in this smoothie contain a high level of dietary fiber (soluble and insoluble fiber) that makes it extremely satiating and aids weight loss by keeping you satiated for a prolonged period of time and reducing total calorie intake throughout the day.

Dietary fiber present in the smoothie also aids digestion and detox by regularizing bowel movement and removing toxins from the colon. It also helps to relieve constipation and piles. Yogurt and milk adds a rich and creamy texture to the smoothie and provides an abundant amount of protein.

Pears are a crunchy and juicy fruit loaded with dietary fiber, antioxidants, vitamins and minerals that support optimum health. Pears are a rich source of dietary fiber (non-soluble polysaccharides) that act as a laxative and add bulk to the stool that helps to regularize bowel movement and provides protection against colon cancer. Pears are a low-calorie fruit that aids weight loss by improving satiety without adding too many calories.

Pears contain a high level of vitamin C, a powerful antioxidant that protects the cells against harmful free radicals. Antioxidant flavonoid phytonutrients such as β-carotene, lutein, and zeaxanthin present in pears protect the eyes against age-related macular degeneration and cataracts.

Oats are a rich source of dietary fiber, protein, vitamins and minerals. Oats contain an abundant amount of both soluble and insoluble fiber that helps to regulate bowel movement and support digestion, lower cholesterol level in the blood, reduce the risk of diabetes and prevent inflammation. Oats also contain the considerable amount of plant-based proteins that improves satiety and helps to heal and rejuvenate the muscles and tissues.

Both yogurt and milk used in this smoothie supply wholesome amount of protein to the smoothie that promotes the formation of lean muscle mass and boosts metabolism which in turn aids weight loss. Milk and yogurt also contain considerable amount of calcium and vitamin D that promotes strong and healthy bones and teeth and reduces the risk of osteoporosis and brittle bones. Yogurt, being a fermented food contains

Cinnamon not only adds a spicy kick to the smoothie but also supplies a wholesome amount of antioxidants that help to maintain healthy function of the organ systems and maintain cardiovascular health. The antioxidants present in cinnamon also help to reduce harmful effects of inflammation in people suffering from Type 2 Diabetes. Antimicrobial properties of cinnamon help to fight off Candida and H.pylori bacteria that infect the gastrointestinal tract and cause ulcers.

Here is the recipe…

This is a simple and healthy smoothie made using fresh and whole ingredients which make it suitable even for kids and toddlers. The recipe of this smoothie can be modified to suit a diabetic diet by simply leaving out the honey or replacing it with Stevia.